Our ancestors created the first lamp around 70,000 BC when hollow rocks were lit on fire fueled by moss and animal fat. In later times, these stone rocks were replaced by clay, shells, glass, pottery, iron, and brass while animal fat was substituted by more fuel efficient substances of oils, petroleum, coal, turpentine, alcohol, and then to electricity. In 7th Century BC, the greeks replaced torches with terra cotta lamps. Hence the word lamp is derived from the Greek word lampas meaning torch. 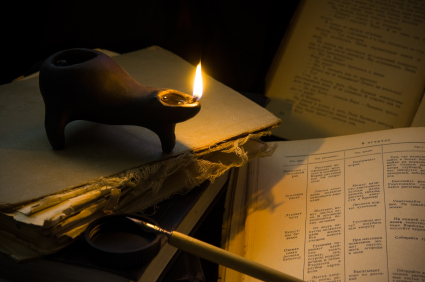 Lamps have made some dramatic evolutionary changes from a functional and aesthetic point of view. In response to changes in wicking, draft protection, and smoke-reducing technology, lamps have seen amazing design changes in saucer, spout, bottoms, and overall body shapes.

Since then, lamps have been designed for much more than its lighting functional purposes. It has been designed as a symbol of style and elegance as well as a creative way to set the ambiance and mood of any space.

Different occasions and locations call for special lighting needs. For example, a table lamp is used to set the mood on a table or desk while lighting in a kitchen, such as kitchen island lighting would be different. Overall style is also an important issue to address while choosing lighting. Contemporary lighting is available for the modern designer while rustic lighting may appeal more to those who prefer a more warm and comfortable atmosphere. For the classic look that can't go wrong, traditional lighting works beautifully.

Create an account and join our list to hear about exclusive offers, new collections and sale events. Exclusions apply.

Create an account and join our list to hear about exclusive offers, new collections and sale events. Exclusions apply.

Shop with Confidence! There is no Risk
3-Day Delivery or Get $50

We Pay Your Tax! No Sales Tax in any state.
Fast, Free Shipping & Returns